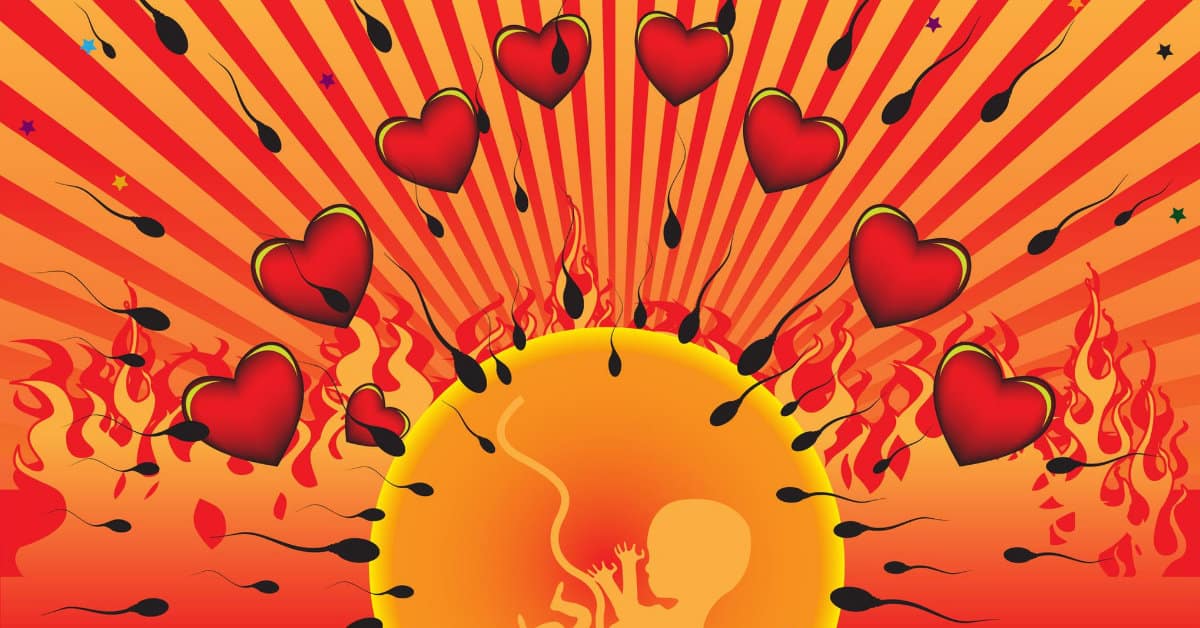 There’s rumbling around the internet about whether or not you can use hot sauce as a spermicide, specifically whether you can put hot sauce in a used condom to prevent the sperm from being used to impregnate someone.

There are two standard components to hot sauce that some people suggest may have a sperm-killing effect:

Some people suggest that capsaicin, a chemical found in chili peppers, can act as a spermicide. Capsaicin is what makes chili peppers “burn” — as in the way spicy food “burns” your tongue, and how chili peppers can literally burn your skin.

Vinegar is another common ingredient in hot sauce, and some people suggest that vinegar and other acidic liquids like lemon juice can prevent pregnancy by killing sperm. While it is understood that sperm does not thrive in acidic environments (Olmsted et. al, 2000) and that the pH of hot sauce must be <4.6 (Braun, 2021), there is no direct causal evidence that vinegar kills sperm, nor is it recommended to use vinegar as a contraceptive or spermicide.

So, does hot sauce kill sperm?

While it’s logically possible that the acid and capsaicin found in hot sauce would kill sperm, there is no direct medical evidence that indicates to what extent, and medical professionals strongly recommend against using hot sauce as a spermicidal agent.

What would happen if you tried to use hot sauce to kill sperm?

If you are wondering about hot sauce as a spermicide because you are looking to prevent pregnancy in general, or because you are afraid of your partner trying to impregnate themselves with the contents of a used condom, you should look into spermicide condoms. These condoms use spermicidal lubricants like Nonoxynol-9, which is a body-safe spermicide trusted by medical professionals. Spermicidal gels are also easily accessible over-the-counter or on pharmacy shelves and are shown to be 72-86% effective at preventing pregnancy.

Alternatively, some people wonder if consuming hot sauce will kill their sperm, either because they are hoping it will help them and their partner prevent pregnancy, or the opposite: because they are worried that overeating spicy food will impact their fertility. In both cases, consuming hot sauce and other spicy foods has not been shown to kill or reduce sperm count.

Where does this question even come from?

You may have just heard rumblings online, but this question comes from a recent lawsuit involving mega-musician Drake. There was news that a model accused Drake of filling a used condom with hot sauce to kill the sperm which left her with burns when she tried to use the used condom to inseminate herself.

It’s tricky to pin down the origin of hot sauce. It’s clear that people have been using hot chili peppers for some time in cooking, but harder to identify when we went from using chili peppers and spices, to creating spicy sauces. History of the Chili Pepper Archaeological excavations have revealed that we have cultivated…

Hot sauce is supposed to be 🌶 spicy 🌶 — but it often tastes equally SOUR as it does spicy. Why? Because almost all hot sauces leverage highly acidic ingredients. Most hot sauces are vinegar-based You’ll be hard-pressed to find a single hot sauce that doesn’t have vinegar in it — most of them use… You may have just whipped up a huge batch of homemade hot sauce, or maybe you found your favorite brand on clearance and bought way too much. Either way, the good news is that you can safely freeze hot sauce for years in order to extend its shelf life (or just to make more room…

As Americans, we often think of Mexican food as synonymous with spicy. Chilies are native plants to Mexico and Central America, and they have been used as both food and medicine for centuries. Jalapeños, serranos, and habanero peppers are very common in Mexico and are widely used as a spicy element and flavoring in…

Hot sauce is one of the world’s favorite condiments. Rich and fatty, light and delicate — nearly all of our favorite foods can be made better with a dash of the good stuff. If you can’t get enough of the burn, here are 5 fascinating hot sauce facts to inspire you. Over 54% of households…